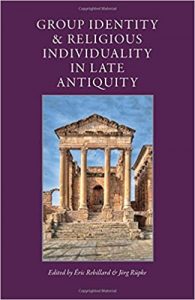 To understand the past, we necessarily group people together and, consequently, frequently assume that all of its members share the same attributes. In this ground-breaking volume, Eric Rebillard and Jörg Rüpke bring renowned scholars together to challenge this norm by seeking to rediscover the individual and to explore the dynamics between individuals and the groups to which they belong. Instead of taking religious groups as their point of departure, the authors in Group Identity and Religious Individuality in Late Antiquity address the methodological challenges attached to a rescaling of the analysis at the level of the individual. In particular, they explore the tension between looking for evidence about individuals and taking individuals into account when looking at evidence. Too often, the lack of direct evidence on individuals is used as a justification for taking the group as the unit of analysis. However, evidence on group life can be read with individuals as the focal point. What it reveals is how complex is the interaction of group identity and religious individuality. The questions examined by these authors include the complex relationships between institutional religions and religious individuals, the possibility of finding evidence on individual religiosity and exploring the multiplicity of roles and identities that characterizes every individual. Shifting the attention towards individuals also calls into question the assumption of groups and invites the study of group-making process. The result is a picture that makes room for dynamic tension between group identity and religious individuality.