in the Platonist Tradition 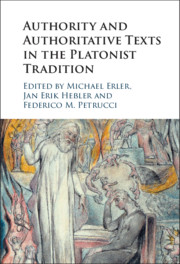 All disciplines can count on a noble founder, and the representation of this founder as an authority is key in order to construe a discipline’s identity. This book sheds light on how Plato and other authorities were represented in one of the most long-lasting traditions of all time. It leads the reader through exegesis and polemics, recovery of the past and construction of a philosophical identity. From Xenocrates to Proclus, from the sceptical shift to the re-establishment of dogmatism, from the Mosaic of the Philosophers to the Neoplatonist Commentaries, the construction of authority emerges as a way of access to the core of the Platonist tradition.

Chapter 2 – An Iconography of Xenocrates’ Platonism

Chapter 4 – Authority beyond Doctrines in the First Century bc

Chapter 5 – Authority and Doctrine in the Pseudo-Pythagorean Writings

The Hypothesis of Platonic Authority

Chapter 9 – Conflicting Authorities? Hermias and Simplicius on the Self-Moving Soul

Chapter 10 – Kathēgemōn: The Importance of the Personal Teacher in Proclus and Later Neoplatonism

Chapter 11 – ‘In Plato we can see the bad characters being changed by the good and instructed and purified.’