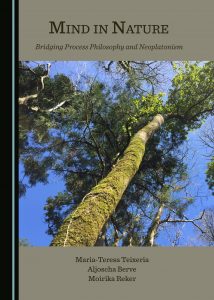 The anthology Mind in Nature: Bridging Process Philosophy and Neoplatonism (edited by Maria-Teresa Teixeira, Aljoscha Berve, and Moirika Reker) is scheduled for release on February 2021.

This collection of essays written by leading Whitehead scholars bridges two important philosophical movements in Western philosophy separated by many centuries: Neo-Platonism and Process Philosophy. It focuses on a variety of topics, which can be found in both theories, including creativity, temporality, holism, potentiality, causality, evolution, organism, and multiplicities. They all concur with an integral, natural worldview, showing that wholeness, complexity, and indivisibility are prevalent in Nature.

All in all, it brings together Neo-Platonism and Process Philosophy through the impact the former had on the latter. This volume shows that process philosophy can contribute to an integral worldview as it draws on ancient philosophy, setting new paradigms for novel approaches to nature, science and metaphysics.

The End of Final Causality in Plotinus’ Process Understanding of Nature

Uneasy Rapprochement of the Neoplatonic Eternity and Christian

Historicity in the Thought of Ioane   30

Schopenhauer and Platonic Metaphysics. Towards a New Interpretation of the World as Will and Representation  39

Whitehead’s Appropriation of Plato’s χωρα: Its Meaning and Effect for a Philosophy of Natural Experience  50

Unity and Multiplicity: The Road to Openness. Plotinus in Henri Bergson’s Thought  59

A Bergsonian Reading of Plotinus’ Theory of Time    75

The Unity between Beauty and Good: Ethics of Contemplation and the Creation of Gardens  86

Infinity and Unity: From Eriugena to Whitehead  96

The World ‘Hangs Together’: Nature, Non-Being, and Infinity in John Scotus Eriugena and Alfred North Whitehead   111

God and Creation in A.N. Whitehead and Dionysius the Areopagite   121

Nature With or Without Mind? – Science and the View from Nowhere in the 19th Century   148

Symbolism and Dialogue: The Language of Discovery    166

The Concepts of “Creation” in the Late Philosophy of A. N. Whitehead   184

A Process of Merging the Interior and Exterior Reality: A Short View on the Structure of Credition  201