Porphyry of Tyre and the Pagan-Christian Debate 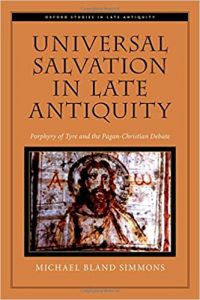 This study offers an in-depth examination of Porphyrian soteriology, or the concept of the salvation of the soul, in the thought of Porphyry of Tyre, whose significance for late antique thought is immense. Porphyry’s concept of salvation is important for an understanding of those cataclysmic forces, not always theological, that helped convert the Roman Empire from paganism to Christianity. Porphyry, a disciple of Plotinus, was the last and greatest anti-Christian writer to vehemently attack the Church before the Constantinian revolution. His contribution to the pagan-Christian debate on universalism can thus shed light on the failure of paganism and the triumph of Christianity in late antiquity. In a broader historical and cultural context this study will address some of the issues central to the debate on universalism, in which Porphyry was passionately involved and which was becoming increasingly significant during the unprecedented series of economic, cultural, political, and military crises of the third century. As the author will argue, Porphyry may have failed to find one way of salvation for all humanity, he nonetheless arrived a hierarchical soteriology, something natural for a Neoplatonist, which resulted in an integrative religious and philosophical system. His system is examined in the context of other developing ideologies of universalism, during a period of unprecedented imperial crises, which were used by the emperors as an agent of political and religious unification. Christianity finally triumphed over its competitors owing to its being perceived to be the only universal salvation cult that was capable of bringing about this unification. In short, it won due to its unique universalist soteriology. By examining a rival to Christianity’s concept of universal salvation, this book will be valuable to students and scholars of ancient philosophy, patristics, church history, and late antiquity.

4 The Contra Christianos in the Context of Universalism

Part II The Historical and Cultural Context of Universalism

6 The Meaning of Salvation in a Greco-Roman Milieu