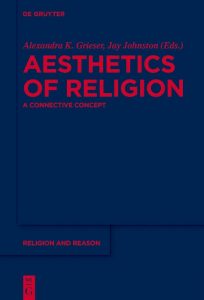 This volume is the first English language presentation of the innovative approaches developed in the aesthetics of religion. The chapters present diverse material and detailed analysis on descriptive, methodological and theoretical concepts that together explore the potential of an aesthetic approach for investigating religion as a sensory and mediated practice. In dialogue with, yet different from, other major movements in the field (material culture, anthropology of the senses, for instance), it is the specific intent of this approach to create a framework for understanding the interplay between sensory, cognitive and socio-cultural aspects of world-construction. The volume demonstrates that aesthetics, as a theory of sensory knowledge, offers an elaborate repertoire of concepts that can help to understand religious traditions. These approaches take into account contemporary developments in scientific theories of perception, neuro-aesthetics and cultural studies, highlighting the socio-cultural and political context informing how humans perceive themselves and the world around them. Developing since the 1990s, the aesthetic approach has responded to debates in the study of religion, in particular striving to overcome biased categories that confined religion either to texts and abstract beliefs, or to an indisputable sui generis mode of experience. This volume documents what has been achieved to date, its significance for the study of religion and for interdisciplinary scholarship.

Alexandra Grieser and Jay Johnston – What is an Aesthetics of Religion? From the Senses to Meaning—and Back Again

PART I Fields and Topics

Mikael Aktor – Grasping the Formless in Stones: The Petromorphic Gods of the Hindu Pañcāyatanapūjā

John T. Hamilton and Almut-Barbara Renger – Religion, Literature, and the Aesthetics of Expressionism

Adrian Hermann – Screening the Father of Lights: Documentary Film and the Aesthetics of the Nonfictional in Contemporary Religion

Niklaus Largier – Below the Horizon of Meaning: Figuration, Disfiguration, Transfiguration

Christoph Auffarth – What Does a Reformed City Look Like? – Changes in Visible Religion During the Reformation in Bremen

Hubert Mohr – Standing, Not Walking – The Hieratic as a Key Term of an Anthropologically Based Aesthetics of Religion

Alexandra Grieser – Blue Brains: Aesthetic Ideologies and the Formation of Knowledge Between Religion and Science

Jens Kreinath – Aesthetic Dimensions and Transformative Dynamics of Mimetic Acts: The Veneration of Habib-i Neccar Among Muslims and Christians in Antakya, Turkey

Annette Wilke – Moving Religion by Sound: On the Effectiveness of the Nāda-Brahman in India and Modern Europe

Sebastian Schüler – Aesthetics of Immersion: Collective Effervescence, Bodily Synchronisation and the Sensory Navigation of the Sacred

Anne Koch-  The Governance of Aesthetic Subjects Through Body Knowledge and Affect Economies. A Cognitive-Aesthetic Approach

Manuel A. Vásquez – Religion in the Flesh: Non-Reductive Materialism and the Ecological Aesthetics of Religion

PART V In Conversation: Essays About the Connectivity of an Aesthetics of Religion

François Gauthier – Consumer Culture and the Sensory Remodelling of Religion

S. Brent Plate – The Artificiality of Aesthetics: Making Connections on the Erie Canal