A Guide to Proclus 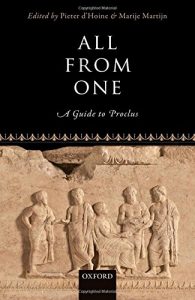 Proclus (AD 412–85) was one of the last official ‘successors’ of Plato at the head of the Academy in Athens at the end of antiquity, before the school was finally closed down in 529. As a prolific author of systematic works on a wide range of topics and one of the most influential commentators on Plato of all times, the legacy of Proclus in the cultural history of the west can hardly be overestimated. This book introduces the reader to Proclus’ life and works, his place in the Platonic tradition of antiquity, and the influence his work exerted in later ages. Various chapters are devoted to Proclus’ metaphysical system, including his doctrines about the first principle of all reality, the One, and about the Forms and the soul. The broad range of Proclus’ thought is further illustrated by highlighting his contribution to philosophy of nature, scientific theory, theory of knowledge, and philosophy of language. Finally, also his most original doctrines on evil and providence, his Neoplatonic virtue ethics, his complex views on theology and religious practice, and his metaphysical aesthetics receive separate treatments.

2 Proclus’ Place in the Platonic Tradition

4 The One, the Henads, and the Principles*

5 Platonic Forms and the Triad of Being, Life, and Intellect

8 Mathematics and the Sciences

9 Proclus on Epistemology, Language, and Logic

11 Theurgy in the Context of Proclus’ Philosophy