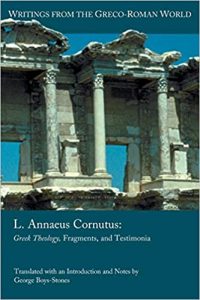 Cornutus is not well known among students of ancient philosophy. Yet this first-century Stoic philosopher is a very interesting figure and deserves more attention than he has hitherto received. Boys-Stones’ book does much to counteract this disregard. He prints and translates into English Cornutus’ sole extant work, Greek Theology (Ἐπιδρομὴ τῶν κατὰ τὴν ἑλληνικὴν θεολογίαν παραδεδομένων), and collects and translates all fragments and testimonies of Cornutus, adding succinct footnotes. The forty-page introduction enlightens us about Cornutus’ philosophical profile and explains what makes him distinctive. The book is rounded out by an index of sources, concordances, bibliography, and a general index. Why, then, does Cornutus deserve our attention? One reason is his focus on poetry and language from a philosophical point of view. Stoics had a reputation in antiquity for their interest in studying poetry and language from a (distinctive) philosophical standpoint. Indeed they were often criticized for trying to harmonize the stories of early poets, such as Homer and Hesiod, with Stoic doctrine (Cicero, De nat. deor. I.41, Philodemus, De pietate col. vi, Plutarch, De aud. poet. 31d). Cornutus exemplifies an intriguing variation of this Stoic tendency. Like other Stoics, Cornutus had a deep interest in poetry, as is suggested by his composition of commentaries on Virgil (pp. 182–94), and it is no accident that his students in Rome included the poets Lucan and Persius (see Life of Persius and Persius, Satura 5, Boys-Stones pp. 198–215). Cornutus was in fact renowned as a critic of poetry in late antiquity (Augustine, De Utilitate Credendi 17; F37 Boys-Stones). The evidence suggests that Cornutus’ focus on poetry was part of his broader interest in language. This becomes evident in his treatise on orthography, of which we only have the Latin excerpts of Cassiodorus (collected and translated by Boys-Stones pp. 142-155). Cornutus’ interest in language also motivated his engagement with Aristotle’s Categories—yet another reason for which Cornutus deserves our attention. For, while contemporary Platonists such as Lucius and Nicostratus conceived the Categories as an ontological work, that is, as a work that distinguishes kinds of beings, and contemporary Peripatetics understood it as a work of semantics, that is, a work concerned with words that have meaning, Cornutus instead considered the Categories to be a work of grammar dealing with words as such (περὶ τῶν λέξεων καθὸ λέξεις, Porphyry In Cat. 59.10 Busse), and accused Aristotle of leaving out certain classes of words. This interpretation of the Categories is peculiar to Stoicism. Cornutus was preceded by Athenodorus in criticizing the Categories as a deficient treatment of verbal expressions, in the same way that contemporary Platonists considered it as a deficient work of ontology, but Cornutus went further than Athenodorus in also challenging the coherence of Aristotle’s work. Cornutus’ interpretation has recently been well presented by Griffin, yet now Boys-Stones has collected and translated the relevant evidence (pp. 167–76).

3.1. Stoicism as an international movement

3.2. Stoicism as a ‘textual community’

Titles of works by Cornutus

Notes on Texts and Referencing

1.2. Structural markers in the Greek Theology

1.3. The Greek Theology  and Plato’s Timaeus

On Pronunciation or Orthography (surviving extracts)

Fame as a critic

The ancient Life of Persius