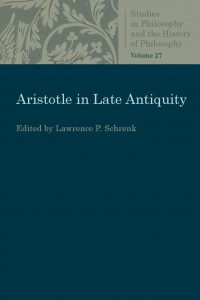 Consisting of nine studies, this volume presents a series of specific insights on Aristotle’s influence from Plotinus through Arabic thought. In the first article, Lloyd P. Gerson shows how Plotinus develops much of his metaphysics in conscious opposition to that offered by Aristotle. Steven K. Strange provides a detailed analysis of the arguments of Ennead 3.7, in which Plotinus surveys classical texts on the nature of time, including Aristotle’s Physics. The next three essays demonstrate Aristotle’s influence on philosophers of the Late Greek era. R. J. Hankinson examines Galen’s seminal work in the logic of relations and presents a full analysis of Galen’s intricate account of relational logic found in several of his treatises. Arthur Madigan investigates the sixth, seventh, and eighth aporiae of Alexander of Aphrodisias’s Metaphysics B, which concern species and genera. In order to elucidate the relationship between the process of discovering a thesis and its subsequent demonstration, Lawrence P. Schrenk examines the four « dialectical » methods offered by the Greek commentators on Aristotle: division, definition, demonstration, and analysis. The final group of essays looks at Aristotelian thought within the Byzantine and Islamic cultures. Leo J. Elders presents a comprehensive survey of Aristotle’s influence on Greek Christian authors, tracing his ideas in the work of Christian apologists, theologians, and historians. Ian Mueller follows Aristotelian themes in Hippolytus’s criticisms, concluding that the « Aristotle » of Hippolytus and Basilides was only a corrupted version of the classical Aristotle. While Photius is best known for his role in ecclesiastical history, John P. Anton explores Photius’s philosophical adaptation of the Aristotelian account of substance. Lastly, Therese-Anne Druart makes the transition from Greek to Arabic philosophy in her discussion of Ibn Rushd, or Averroes, providing a valuable overview of Averroes as Aristotelian commentator.

PART I: ARISTOTLE AND PLOTINUS

1 Plotinus and the Rejection of Aristotelian Metaphysics – LLOYD P. GERSON

2 Plotinus on the Nature of Eternity and Time – STEVEN K. STRANGE

3 Galen and the Logic of Relations – R. J. HANKINSON

5 Proof and Discovery in Aristotle and the Later Greek Tradition: A Prolegomenon to a Study of Analysis and Synthesis – LAWRENCE P. SCHRENK