Myth, Lifestyle, and Society in the School of Valentinus 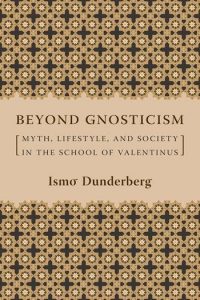 Valentinus was a popular, influential, and controversial early Christian teacher. His school flourished in the second and third centuries C.E. Yet because his followers ascribed the creation of the visible world not to a supreme God but to an inferior and ignorant Creator-God, they were from early on accused of heresy, and rumors were spread of their immorality and sorcery. Beyond Gnosticism suggests that scholars approach Valentinians as an early Christian group rather than as a representative of ancient “Gnosticism”-a term notoriously difficult to define. The study shows that Valentinian myths of origin are filled with references to lifestyle (such as the control of emotions), the Christian community, and society, providing students with ethical instruction and new insights into their position in the world. While scholars have mapped the religio-historical and philosophical backgrounds of Valentinian myth, they have yet to address the significance of these mythmaking practices or emphasize the practical consequences of Valentinians’ theological views. In this groundbreaking study, Ismo Dunderberg provides a comprehensive portrait of a group hounded by other Christians after Christianity gained a privileged position in the Roman Empire. Valentinians displayed a keen interest in mythmaking and the interpretation of myths, spinning complex tales about the origin of humans and the world. As this book argues, however, Valentinian Christians did not teach “myth for myth’s sake.” Rather, myth and practice were closely intertwined. After a brief introduction to the members of the school of Valentinus and the texts they left behind, Dunderberg focuses on Valentinus’s interpretation of the biblical creation myth, in which the theologian affirmed humankind’s original immortality as a present, not lost quality and placed a special emphasis on the “frank speech” afforded to Adam by the supreme God. Much like ancient philosophers, Valentinus believed that the divine Spirit sustained the entire cosmic chain and saw evil as originating from conspicuous “matter.” Dunderberg then turns to other instances of Valentinian mythmaking dominated by ethical concerns. For example, the analysis and therapy of emotions occupy a prominent place in different versions of the myth of Wisdom’s fall, proving that Valentinians, like other educated early Christians, saw Christ as the healer of emotions. Dunderberg also discusses the Tripartite Tractate, the most extensive account to date of Valentinian theology, and shows how Valentinians used cosmic myth to symbolize the persecution of the church in the Roman Empire and to create a separate Christian identity in opposition to the Greeks and the Jews.

Part 1. Myth, Lifestyle, and the World in the Fragments of Valentinus
2. Immortality as a Way of Life
3. Adam’s Frank Speech
4. Cosmic Sympathy and the Origin of Evil

Part 2. Valentinian Cosmogony, Lifestyle, and Other Christians
5. Myth and Lifestyle for Beginners
6. Myth and the Therapy of Emotions
7. The Creator-God and the Cosmos
8. Walk Like a Valentinian
9. Two Classes of Christians in Practice

Appendix: Remarks on the Sources of Irenaeus’s and Hippolytus’s Accounts of Valentinian Theology