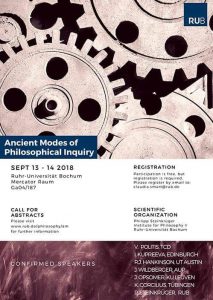 At least since Socrates, philosophy has been understood as the desire for acquiring a special kind of knowledge, namely wisdom, a kind of knowledge that human beings ordinarily do not possess. According to ancient thinkers this desire may result from a variety of causes: wonder or astonishment, the painful realization that one lacks wisdom, or encountering certain hard perplexities or aporiai. As a result of this basic understanding of philosophy, Greek thinkers tended to regard philosophy as an activity of inquiry (zētēsis) rather than as a specific discipline. Discussions concerning the right manner of engaging in philosophical inquiry – what methodoi or routes of inquiry were best suited to lead one to wisdom – accordingly became an integral part of ancient philosophy, as did the question how such manners of inquiry related to, and differed from, other types of inquiry, for instance medical or mathematical.

It is the ideal of philosophy as inquiry, and the various ways in which ancient philosophers conceived of the manner in which such inquiry should be conducted, that we wish to concentrate on in this issue of Logical Analysis and History of Philosophy, whose preliminary title is ‘Ancient Modes of Philosophical Inquiry’. Its aim is, broadly, to investigate the various ways in which ancient philosophers conducted their philosophical investigations, and reflected on how philosophical investigation should be conducted. In particular, we understand this topic in contra-distinction to the explicit epistemologies ancient authors have put forward (for instance, the theory Aristotle describes in his Posterior Analytics).

Please also see the extended call that includes topics we are particularly interested in.

Jens Kristian Larsen (University of Bergen) and Philipp Steinkrüger (Ruhr-Universität Bochum) will serve as Guest-Editors for this volume. For further inquiries, please contact