Apuleius and the Aristotelian De Mundo 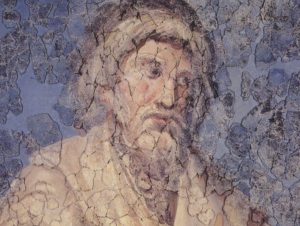 The De Mundo is a fascinating part of Apuleius’ corpus, with much to contribute to our understanding of Mediterranean philosophy in the second century, of philosophical work in the Latin language, of Platonism, and of Apuleius himself. But, sidelined as a mere translation (of the pseudo-Aristotelian work usually known by the same name), it has never received sustained attention in its own right. This workshop brings together an international team of scholars who will address the text from a range of disciplinary perspectives.

Alan Bowen (IRCPS): “Apuleius on the Heavens: A Question of Authority.”

Dylan Burns (Amsterdam): “Basilides of Alexandria ‘On the Cosmos’: Accounts of an Aristotelianizing Gnostic in Stromateis 4.12.88 and Refutatio 7.24.3.”

Irmgard Männlein-Robert (Tübingen): “On the Highest God in Apuleius’ De Mundo: Theology and Hierarchy from a Platonist’s View.”

(Text from the organizers)