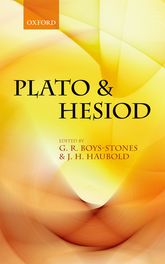 It hardly needs repeating that Plato defined philosophy partly by contrast with the work of the poets. What is extraordinary is how little systematic exploration there has been of his relationship with specific poets other than Homer. This neglect extends even to Hesiod, though Hesiod is of central importance for the didactic tradition quite generally, and is a major source of imagery at crucial moments of Plato’s thought. This volume, which presents fifteen articles by specialists on the area, will be the first ever book-length study dedicated to the subject. It covers a wide variety of thematic angles, brings new and sometimes surprising light to a large range of Platonic dialogues, and represents a major contribution to the study of the reception of archaic poetry in Athens.

Project Academy is a partnership of scholars based in Durham and Tϋbingen, with the aim of developing a major initiative in the study of the Platonic tradition. At the heart of this project will be a series of critical editions, English and German translations, and commentaries of the fragments (and testimonies) of the members of Plato’s Early (or ‘Old’) Academy (ca. 380–266 BCE). Despite the historical importance of the Early Academy, the fragments of those philosophers who were its members are generally inaccessible: they have never been translated into English or German as a whole, and many of the most recent critical editions date from forty years ago and are difficult to obtain. The English-language editions will eventually be published in the new book series Cambridge Texts and Studies in Platonism (Cambridge University Press).

The third workshop in Durham, delayed from April 2020 due to the COVID-19 pandemic, will focus on the methodological and philosophical problems related to three figures of significant interest to the history of Early Platonism: Plato’s amanuensis Philip of Opus, the metaphysician Hermodorus of Syracuse, and the historian/s who contributed to the Index Academicorum, the papyrus history of the Academy found in Herculaneum. Previous workshops treated Speusippus of Athens (Durham, February 2019) and Xenocrates of Chalcedon (Tϋbingen, November 2019). The final workshop in Tϋbingen (TBD) will focus on figures of importance to the later period of the Early Academy, including Polemo of Athens, Crantor of Soli, and Crates of Athens. 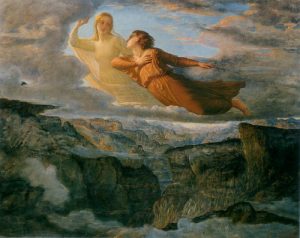 Plato’s Encyclopedia offers a range of articles about Plato and related philosophical and historical themes.

This LibGuide is for the φιλοπλάτωνος!

The reference material on Πλάτων (Plato) is found in several locations: Religious Studies and Philosophy Library (B 351-B 399 non-circulating), Greek and Latin Reading Room (PA 3104, PA 3404-PA 3405, PA 3612, and PA 4279-PA 4333 non-circulating), and Stacks (B 355-B 399 and PA 4279-PA 4333).  Circulating material is found in the Mullen Library stacks. Check the WRLC catalog for monographs and journals that could be applicable to your topic. Check the CU’s e-journals for full text journal articles online. 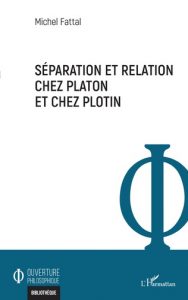 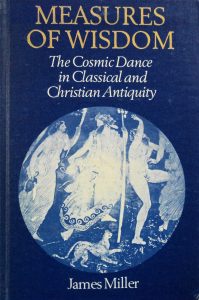 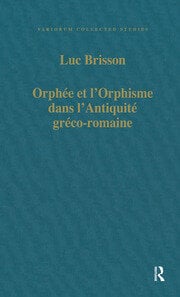 The figure of Orpheus has long exercised a potent influence on religious thought. Yet what we know directly about Orphism comes from a scatter of isolated and often very short fragments quoted in the works of Platonists of the Roman period, notably Proclus, Damascius and Olympiodorus. The author’s concern here is to establish the context in which these passages were cited, and to trace the development of the written tradition, from the texts which contain a critique of the beliefs of the Homeric era to those, whether newly composed or transformed, which show signs of adaptation to later religious and philosophical movements, among them Stoicism and Platonism. In sharp contrast to views held by others, it is argued that it is possible to map out a process of evolution, amongst other criteria by focusing on the role and place of Chronos in the Orphic theogony. The author also asks whether there really ever existed true Orphic sects with a cult with specific rites, and would conclude that the present evidence cannot be held to substantiate this.

Cambridge Texts and Studies in Platonism

Cambridge Texts and Studies in Platonism has a twofold goal.

First, it seeks to produce new editions with commentary and translations into English of texts within the Platonist tradition in antiquity. Plato’s philosophy generated a wide range of philosophical debates, ranging from critical engagement with issues raised in his dialogues to exegetical interpretation of his works. From its establishment around 387 BCE until the purported closure of the philosophical schools in Athens in 529 CE, Plato’s Academy stimulated debates which extended well beyond its physical limits in Athens to the wider Mediterranean and Near East, including ‘schools’ and circles in Alexandria and Syria. The results of these debates are often difficult for modern readers to grasp, as the many works which demonstrate the development of Platonism are not generally accessible and thus remain obscured to the history of philosophy. This series seeks to breathe new life into the texts of the ancient Platonists by providing textual editions, commentaries, and translations of the major and minor figures who shaped the history of Platonism.

Second, it aims to publish innovative and original research on the history of Platonism, understood as the reception and transformation of Plato’s philosophical views across time and space. The philosophy of Plato is considered foundational for the development of later metaphysics, logic, epistemology, cosmology, natural science, biology, ethics, and political theory. Philosophers and other intellectuals from the mid-fourth century BCE until the sixth century CE demonstrated a wide range of assessments, appropriations, and reformulations of the ideas exhibited in Plato’s dialogues. This series seeks to provide a forum for critical engagement in the history of Platonism over a millennium and across a range of cultures and communities, demonstrating the multifaceted nature of Platonism throughout its development.

The series will be published by Cambridge University Press in volumes initially appearing in hardback and electronic editions, but with a subsequent paperback usually after a year or so. All proposals and manuscripts considered will need to be approved by the Series Editors as well as at least one independent referee as part of the peer-review system, with final approval coming from the Syndics of the Press. Edited collections can be considered in addition to monographs and editions as long as they are of uniformly high quality and display a high degree of coherence. The normal length for monographs and edited collections would fall into the range of 80,000-130,000 words.

The Series Editors would be delighted to hear from you if you have a proposal or even a full or partial manuscript ready to submit. Please contact them, or the publisher of Classics, Ancient Philosophy and Byzantine Studies, Cambridge University Press, Michael Sharp (michael.sharp@cambridge.org). 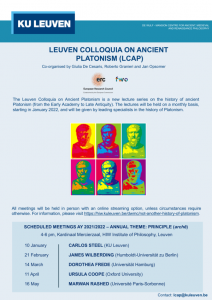 The Leuven Colloquia on Ancient Platonism (LCAP) is a new lecture series on the history of ancient Platonism (from the Early Academy to Late Antiquity), traditionally an important field of study in Leuven. These lectures will be held on a monthly basis, starting in January 2022, hosted by the KU Leuven Institute of Philosophy and the De Wulf-Mansion Centre for Ancient, Medieval and Renaissance Philosophy and will be given by leading specialists in the history of Platonism. Each year the general theme will be narrowed down through the selection of a specific topic on which the invitees will be asked to speak. For the academic year 2021/2022 (second term only) the chosen topic is ‘principle’ (archê).

For each meeting there will be a 45-minute talk by the main speaker (possibly followed by a 15-minute response) and a 30-minute Q&A session.

16 May 2022: Marwan Rashed, Université Paris-Sorbonne. Becoming, Construction and the Infinite in the Timaeus