Faith and Credibility in (Auto)Biographies 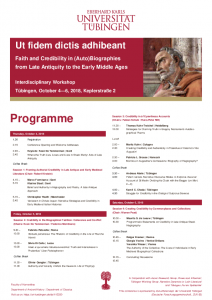 In the February 21, 1851 entry of the diary he kept during his first visit to the United States, Heinrich Schliemann, famous for discovering Troy, proudly notes that he paid a visit to President Millard Fillmore. He also records that he attended a grand, official reception in the White House on the same day. However, unfortunately for him, 20th century scholars have revealed that he had not met the president at all, nor had there been any reception that day. Schliemann invented these events, just as he claimed to have become a US citizen in 1850.

Whereas modern historians and biographers might frown at Schliemann’s fictions, ancient readers might have been less offended. For the ancients, biography and historiography had a different relationship to truth (cf. Pol. 10.21, Plut. Alex. 1): while historians claim to present facts and to be obliged to truth, biography aims at showing the character of a notable individual and giving examples which are worth emulating or that serve as a warning. Therefore, ancient biographers are allowed to (or even have to) idealize, hide or alter facts, and invent events which could have happened. In addition, modern studies have relativized biographical truth (cf. Wagner 2006; Sonnabend 2002) and highlight the narrative and fictional nature of (auto)biographical texts (cf. Wagner-Egelhaaf 2013; Nadel 1984).

As Christian literature and hagiography began to flourish, fundamental conflicts arose. When biographical writing became a normative means of defending and consolidating one’s own religion and attacking the other‘s, the credibility and authenticity of the literary genre had to face new challenges (cf. e.g. Cox Miller 2000).

This workshop aims to explore credibility and authenticity in biographical, autobiographical, and hagiographical literature in Late Antiquity and the Early Middle Ages (c. 200–900). It has a decidedly interdisciplinary character. We welcome historians of these periods as well as scholars of other disciplines (philologists, theologians, etc.) working on the following topics and related questions:

To submit a proposal, please send an English abstract of your paper to credibility@philosophie.uni-tuebingen.de by March 11, 2018.

9.30 – 10.00 Fabrizio Petorella | Rome Solitudo portentosa: The Rhetoric of Credibility in the Life of Paul the Hermit

11.00 – 11.30 Olivier Gengler | Tübingen Authority and Veracity in Mark the Deacon’s Life of Porphyry

4.00 – 4.30 Kamil C. Choda | Tübingen Struggle for Credibility in the Dialogi of Sulpicius Severus