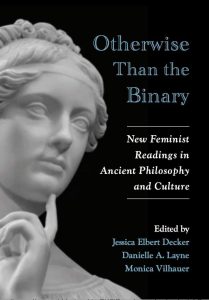 Examines traditional sites of binary thinking in ancient Greek texts and culture to demonstrate surprising ambiguity, especially with regard to sexual difference. Otherwise Than the Binary approaches canonical texts and concepts in Ancient Greek philosophy and culture that have traditionally been understood as examples of binary thinking, particularly concerning sexual difference. In contrast to such patriarchal logic, the essays within this volume explore how many of these seemingly strict binaries in ancient culture and thought were far more permeable and philosophically nuanced. Each contribution asks if there are ways of thinking of antiquity differently—namely, to examine canonical works through a lens that expounds and even celebrates philosophies of difference so as to discover instances where authors of antiquity valorize and uphold the necessity of what has been seen as feminine, foreign, and/or irrational. As contemporary thinkers turn toward new ways of reading antiquity, these selected studies will inspire other readings of ancient texts through new feminist methodologies and critical vantage points. When examining the philosophers and notable figures of antiquity alongside their overt patriarchal and masculinist agendas, readers are invited to rethink their current biases while also questioning how particular ideas and texts are received and read. « This volume rests on an innovative impulse to look anew at binaries in Greek thought. The essays take up a range of binaries that historiographies trace back to the Greeks, and it troubles these binaries, while also linking them to sex/gender binaries at the same time. For example, muthos/logos, stasis/change, same/different, male/female, mind/body, and so forth. And as the editors’ interest in the marginalized signals, the collection specifically examines these binaries with an eye toward their internal hierarchical relationships (e.g., mind is superior to body) and how these have shaped social ontology. While building on some of the feminist and deconstructive work on this issue, the collection moves considerably beyond that, taking up new texts, figures, and issues. The essays are engaging, intelligent, and certainly will further the productive engagement with these texts. » — Jill Gordon, Colby College.