Jewish, Christian and Gnostic Views of the World to Come 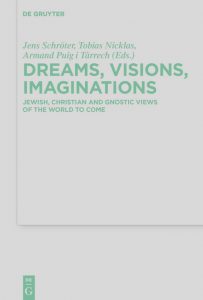 The contributions in this volume are focused on the historical origins, religious provenance, and social function of ancient Jewish and Christian apocalyptic literature, including so-called ‘Gnostic’ writings. Although it is disputed whether there was a genre of ‘apocalyptic literature,’ it is obvious that numerous texts from ancient Judaism, early Christianity, and other religious milieus share a specific view of history and the world to come. Many of these writings are presented in form of a heavenly (divine) revelation, mediated through an otherworldly figure (like an angel) to an elected human being who discloses this revelation to his recipients in written form. In different strands of early Judaism, ancient Christianity as well as in Gnosticism, Manichaeism, and Islam, apocalyptic writings played an important role from early on and were produced also in later centuries. One of the most characteristic features of these texts is their specific interpretation of history, based on the knowledge about the upper, divine realm and the world to come.

Against this background the volume deals with a wide range of apocalyptic texts from different periods and various religious backgrounds.

Where Should We Look for the Roots of Jewish Apocalypticism?  p. 5
John J. Collins

Apocalyptic Literature and Experiences of Contact with the Other-World in Second Temple Judaism and Early  p. 27 Christianity
Luca Arcari

Apocalyptic Writings in Qumran and the Community’s Idea of History  p. 89
Jörg Frey

Time and History: The Use of the Past and the Present in the Book of Revelation  p. 187
Adela Yarbro Collins

Dreams, Visions and the World-to-Come according to the Shepherd of Hermas  p. 215
Joseph Verheyden

Ezra and his Visions: From Jewish Apocalypse to Medieval Tour of Hell  p. 235
Jens Schröter

Views of the World to Come in the Jewish-Christian Sibylline Oracles  p. 261
Olivia Stewart Lester

Between Jewish and Egyptian Thinking: The Apocalypse of Sophonias as a Bridge between Two Worlds?  p. 319
Michael Sommer

From the ‘Gnostic Dialogues’ to the ‘Apostolic Memoirs’: Literary and Historical Settings of the Nag Hammadi Apocalypses  p. 343
Dylan M. Burns

What is ‘Gnostic’ within Gnostic Apocalypses?  p. 385
Jean-Daniel Dubois

Being in corpore/carne and extra corpus: some interrelations within the Apocalypsis Pauli/Visio Pauli  p. 411
Thomas J. Kraus