Philosophy and the Circulation of Knowledge in Antiquity 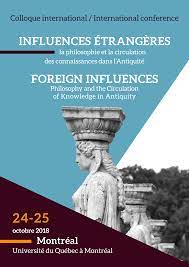 How did Greek and Roman philosophers react to “foreign influences,” or “foreigners” (*xenoi*)? Did Greek and Roman philosophy and literature promote a stereotypical notion of the other, or do we always find different approaches to foreignness? Are stereotypes and prejudices the most common features of ancient representations of foreigners? When philosophers strive to expand the body of knowledge of their time, are they open or closed to the input that may come from other populations?

The Greek concept of the “foreigner” (*xenos*) is rather wide-ranging, as is clear from Socrates’ plea to his judges at the beginning of Plato’s *Apology*, that they tolerate his simple language as they would tolerate a foreigner from Ionia speaking the dialect of that region.

Before Socrates’ philosophical activity, the Presocratics, both physiologists and sophists, were all “guests” or foreigners (*xenoi*) in Athens—not citizens. Moreover, before the arrival of philosophers to mainland Greece, Greeks from Attica or the Peloponnese would go abroad to learn and acquire knowledge. According to Herodotus, Solon, one of the Seven Sages, traveled for ten years to Egypt and to the court of Cresus.

Solon went abroad to “philosophize”, i.e. to collect the wisdom of the learned foreigners.

This conference aims at surveying the different representations of foreigners provided by Greek and Roman philosophers. The goal is to establish whether these representations had an impact on the development of ancient philosophy. Selected papers will focus on the foreigners’

contributions to ancient philosophy and will explain how was possible that philosophy, from its origin through its development, was always intertwined with cultural exchanges around the Mediterranean, despite the different languages, the geographical and historical distances and the barrier of citizenship.

The conference will focus on archaic, classical, Hellenistic, and Roman antiquity. We welcome papers on the notion of “xenos” from different perspectives (anthropological, literary, historical and philosophical).

Deadline for submission: December 20, 2018. Decisions will be made by January 10, 2018. The conference proceedings will be published.