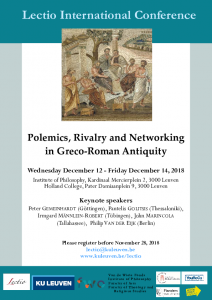 Please submit your proposal via email (lectio@kuleuven.be) by February 28, 2018.

Chair – Jan Opsomer Marco DONATO (Pisa & Paris), Polemics in the Pseudoplatonica: The Academy’s Agenda and the Renaissance of Socratic Dialogue

16.45 – 17.15 |   Chiara MILITELLO (Catania), Replying to Stoics as the Basis of True Aristotelianism: the Significance of Polemics in Alexander of Aphrodisias’ Commentaries and Treatises

13.30 – 14.00 Bruno MARIEN (Leuven), The Recommendation Activity in Late Antique Epistolographers seen against the Background of Competing Personal Networks: the Example of Libanius and Other Fourth-century Letter Writers

14.00 – 14.30 Other Fourth-century Letter Writers Olivier DEMERRE (Gent), Philostratus’ Life of Hermogenes: Rhetorical Debates and Circles in the Lives of the Sophists

16.30 – 17.00 Carlos STEEL (Leuven), A Newly Discovered Treatise from the School of Alexandria. A Discussion on the Status of Astrology at the End of the 6th Century