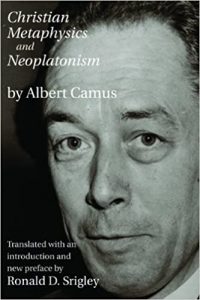 Contemporary scholarship tends to view Albert Camus as a modern, but he himself was conscious of the past and called the transition from Hellenism to Christianity the true and only turning point in history. For Camus, modernity was not fully comprehensible without an examination of the aspirations that were first articulated in antiquity and that later received their clearest expression in Christianity. These aspirations amounted to a fundamental reorientation of human life in politics, religion, science, and philosophy. Understanding the nature and achievement of that reorientation became the central task of Christian Metaphysics and Neoplatonism. Primarily known through its inclusion in a French omnibus edition, it has remained one of Camus’ least-read works, yet it marks his first attempt to understand the relationship between Greek philosophy and Christianity as he charted the movement from the Gospels through Gnosticism and Plotinus to what he calls Augustine’s second revelation of the Christian faith. Ronald Srigley’s translation of this seminal document helps illuminate these aspects of Camus’ work. His freestanding English edition exposes readers to an important part of Camus’ thought that is often overlooked by those concerned primarily with the book’s literary value and supersedes the extant McBride translation by retaining a greater degree of literalness. Srigley has fully annotated Christian Metaphysics to include nearly all of Camus’ original citations and has tracked down many poorly identified sources. When Camus cites an ancient primary source, whether in French translation or in the original language, Srigley substitutes a standard English translation in the interest of making his edition accessible to a wider range of readers. His introduction places the text in the context of Camus’ better-known later work, explicating its relationship to those mature writings and exploring how its themes were reworked in subsequent books. Arguing that Camus was one of the great critics of modernity through his attempt to disentangle the Greeks from the Christians, Srigley clearly demonstrates the place of Christian Metaphysics in Camus’ oeuvre. As the only stand-alone English version of this important work–and a long-overdue critical edition–his fluent translation is an essential benchmark in our understanding of Camus and his place in modern thought.