Christian Origins and the Establishment of the Early Jesus Movement 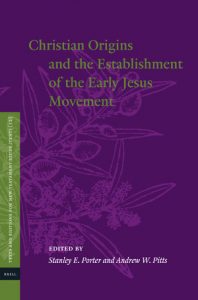 Christian Origins and the Establishment of the Early Jesus Movement explores the events, people, and writings surrounding the founding of the early Jesus movement in the mid to late first century. The essays are divided into four parts, focused upon the movement’s formation, the production of its early Gospels, description of the Jesus movement itself, and the Jewish mission and its literature. This collection of essays includes chapters by a global cast of scholars from a variety of methodological and critical viewpoints, and continues the important Early Christianity in its Hellenistic Context series. (Text by the editors)

Christian Origins and the Establishment of the Early Jesus Movement: An Introduction – By: Stanley E. Porter and Andrew W. Pitts

The Formation of the Jesus Movement and Its Precursors

John the Baptist in the Fourth Gospel – By: Clare K. Rothschild

From John to Apollos to Paul: How the Baptism of John Entered the Jesus Movement – By: Stephen J. Patterson

Followers, Servants, and Traitors: The Representation of Disciples in the Synoptic Gospels and in Ancient Judaism – By: Catherine Hezser

The Pre-citation Fallacy in New Testament Scholarship and Sanders’s Tendencies of the Synoptic Tradition – By: Stanley E. Porter and Andrew W. Pitts

Was Matthew a Plagiarist? Plagiarism in Greco-Roman Antiquity – By: E. Randolph Richards

Compositional Techniques within Plutarch and the Gospel Tradition – By: Michael R. Licona

The Narrative Perspective of the Fourth Gospel – By: Hans Förster

Assessing the Criteria for Differentiating the Cross Gospel – By: Stanley E. Porter and Andrew W. Pitts

From Jesus to Lord and Other Contributions of the Early Aramaic-Speaking Congregation in Jerusalem – By: F. Stanley Jones

Did Jesus, in the Memory of His Earliest Followers, Ever Nurse the Sick? – By: Steven Thompson

The Kingdom of God is among You: Prospects for a Q Community – By: Sarah E. Rollens

Christian Origins and Imperial-Critical Studies of the New Testament Gospels – By: Warren Carter

“No Stone Left upon Another”: Considering Mark’s Temple Motif in Narrative and History – By: Adam Winn

The Holy Spirit as Witness of Jesus in the Canonical Gospels – By: Judith Stack

Sea Storms, Divine Rescues, and the Tribulation: The Jonah Motif in the Book of Matthew – By: Susan M. Rieske

The Parables of Jesus and Socrates – By: Adam Z. Wright

The Jewish Mission and Its Literature

Why Have We Stopped Reading the Catholic Epistles Together? Tracing the Early Reception of a Collection – By: Darian Lockett

A Jewish Denial: 1 John and the Johannine Mission – By: Matthew Jensen

Love One Another and Love the World: The Love Command and Jewish Ethics in the Johannine Community – By: Beth M. Stovell

The New Perspective (on Paul) on Peter: Cornelius’s Conversion, the Antioch Incident, and Peter’s Stance towards Gentiles in the Light of the Philosophy of Historiography – By: Christoph Heilig

Tradition as Interpretation: Linguistic Structure and the Citation of Scripture in 1 Peter 2:1–10 – By: Andrew W. Pitts

1 Peter and the Theological Logic of Christian Familial Imagery – By: Matthew R. Malcolm