Schools and Students in the Ancient City 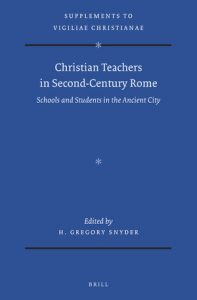 Essays in Christian Teachers in Second-Century Rome situate Christian teachers in the social and intellectual context of the Roman urban environment. The teaching and textual work of well-known figures such as Marcion, Justin, Valentinus, and Tatian are discussed, as well as lesser-known and appreciated figures such as Theodotus the Cobbler. Authors probe material and visual evidence on teachers and teaching activity, adopting different theoretical perspectives that go beyond the traditional “church – school” dichotomy: comparative looks at physicians, philosophers and other textual experts; at synagogues, shops and other sites where students gathered around religious entrepreneurs. Taken as a whole, the volume makes a strong case for the sheer diversity of Christian teaching activity in second-century Rome.