Dreams as Divine Communication in Christianity

From Hermas to Aquinas 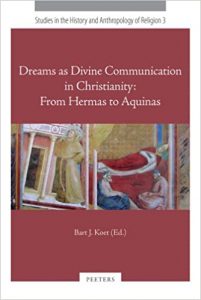 In the book presented here, one encounters dreams and visions from the history of Christianity. Faculty members of the Tilburg School of Theology (TST; Tilburg University, The Netherlands) and other (Dutch and Flemish) experts in theology, Late Antiquity and the Middle Ages present a collection of articles examining the phenomenon of dreaming in the Christian realm from the first to the thirteenth century. Their aim is to investigate the dream world of Christians as a source of historical theology and spirituality. They try to show and explain the importance and function of dreams in the context of the texts discussed, meanwhile making these texts accessible and understandable to the people of today. By contextualizing those dreams in their own historical imagery, the authors want to give the reader some insight into the fascinating dream world of the past, which in turn will inspire him or her to consider the dream world of today.

J. VERHEYDEN AND M. GRUNDEKEN, The Spirit Before the Letter: Dreams and Visions as the Legitimation of the Shepherd of Hermas. A Study of Vision

V. HUNINK, ‘With the Taste of Something Sweet Still in my Mouth’: Perpetua’s Visions

B.J. KOET, Jerome’s and Augustine’s Conversion to Scripture through the Portal of Dreams (Ep. 22 and Conf. 3 and 8)

A. SMEETS, The Dazzle of Dawn: Visions, Dreams and Thoughts on Dreams by Gregory the Great

W. VERBAAL, Mysteria somniorum: Bernard of Clairvaux and the Pedagogic of Dreaming

G.P. FREEMAN, Clare of Assisi’s Vision of Francis: On the Interpretation of a Remarkable Vision

Index of names, subjects and passages