A Study of The Ethics of The Tripartite Tractate 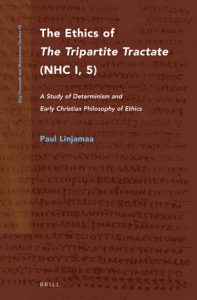 The aim of this study is to explore the ethics of the Nag Hammadi text, The Tripartite Tractate. This text, the fifth tractate in Nag Hammadi Codex I, has received comparatively little attention, although it is the most detailed Valentinian treaty still extant. By investigating the ethics of The Tripartite Tractate, this study not only illuminates a previously unstudied aspect of this very interesting early Christian text, but also seeks to explore the workings of early Christian determinism. This has previously been presented as “Gnostic”, and then not taken seriously, or been disregarded as an invention of intra-Christian polemics. The present study challenges this conception and presents insights into how early Christian determinism worked, sustaining viable and functioning ethical systems. The ethics of The Tripartite Tractate are approached by connecting practical, lived ethics and the theoretical foundations for ancient ethical discussion. This entails examining the text’s ontology and epistemology, as well as ancient cognitive and behavioral theory. In short, this study aims to answer the question, “how should people behave?”, by first exploring questions regarding how human behavior and actions were thought to have worked in the first place. Part I of the study investigates The Tripartite Tractate’s views on epistemology, ontology and theory of passions, as well as the nature of the human will and cognitive apparatus. It is noted that The Tripartite Tractate outlines a Christian deterministic system that denies free will in humans. The Tripartite Tractate presents an anthropology with three different classes of humans, each person being defined by the composition of their physical and mental make up, a mixture of the three basic substance viable in the cosmic system: matter, psychê and pneuma. This part of the study explores the The Tripartite Tractate’s dependence on, and relation to, Greco-Roman physics and theories of passions and cognition, and how they relate to and legitimize social structures. As a conclusion to Part I, the context of the text’s determinism is discussed and it is suggested that the views that Origen of Alexandria took action against in his work Peri Archon are reflected in The Tripartite Tractate. Part II of the study is devoted to the practical and social implications of the text’s determinism and explores how it would have worked to create and sustain group identity. It is argued that the tripartite anthropology promotes a pedagogical schema that points out different roles and responsibilities humans have in relation to each other. The people termed “pneumatics” are described as ethical experts and are called upon to play the role of teachers in the ideal community, while the people termed “psychics” are described as the helpers and students of the “pneumatics”. The “material” people are outsiders destined to be lost. It is argued that the text utilizes ancient pedagogic language in order to construct the ideal social structure, and the usage of the terms “church” and “school” in the text is analyzed. It is suggested that the most likely social structure referenced by TriTrac would have comprised a group consisting of two parts: intellectually advanced pneumatics in an inner study circle within a second, larger part consisting of psychic everyday Christians, two groups that at times came together to study and celebrate communion and baptism. The everyday Christians are described as driven by honor, and encouraged to prosper in the world for the benefit of the larger community. This is discussed in light of the concept of “honor” and its importance in Roman society. Part II of the study demonstrates the effectiveness of a deterministic anthropology for creating and sustaining a group structure where a viable ethical system was implemented. Part III of the study recapitulates the main arguments, and also explores the context of the text in light of the findings. It is argued that early third-century Alexandria is the most likely original context of the text. The implications of the study are discussed in light of the broader topic of early Christianity. Among other things, it is suggested that the doctrine of free will, which became a cornerstone in later Christianity, developed in the wake of debates with Christians we find represented in The Tripartite Tractate, whose approaches represent a serious alternative to the doctrine of free will.

Acknowledgments
List of Abbreviations
Introduction
1 The Structure of the Present Study
2 Who Were the Valentinians?
3 The Myth in TriTrac and the Ethics in Storytelling
4 Previous Research on TriTrac and the Historical Setting of the Text
5 Early Christian Ethics and the Bad Reputation of Determinism
6 Notes on Translation and Transcription

1 The Ontological and Epistemological Foundations for Ethics
1 Knowledge in TriTrac and Ancient Epistemology
2 Phantasms, Likenesses, and Images: the Ontology of TriTrac and the Question of Logos
3 Remembering (and) the Nature of Virtue
4 The Individual and the Collective
5 Mixing and Blending, Truth and Falsehood
6 Conclusion: Ontology, Epistemology and Ethics

2 Emotions, Demons, and Moral Ability
1 Emotions and Cognitive Theory in Ancient Thought
2 Emotions and the Creation Narrative
3 The Logos’ First Movement and Ancient Cognitive Theory
4 Good Emotions
5 Negative Passions as “Mixed” Heavenly Powers and their Influence on Humans
6 Apatheia, Therapeia, and Eleutheria
7 Femaleness and the Sickness of Emotions
8 Conclusion

4 Natural Human Categories and Moral Progress
1 The Three Classes of Humans in TriTrac
2 The Pedagogical Purpose of the Logos’ Organization and the Composition of Humans
3 Three Categories of Humans According to TriTrac’s Epistemology and Theory of Passions
4 Restricted Choice in Practice
5 Fixed, Fluid, or in Flux? The Advantages of a Fixed Anthropology
6 Conclusions

5 School or Church? Teaching, Learning, and the Community Structure
1 On the Community Structure Behind TriTrac in Light of the Term “Church”
2 The Cosmos as a “School” in TriTrac and its Early Christian Context
3 The “School of Conduct” in the Pleroma and the Gaining of Form
4 The Cosmic School: an Imperfect Reflection of the Heavens
5 Silent and Oral Instruction: Formation, Baptism and Education
6 The Duty of the Pneumatic Moral Expert and the Formation of Psychic Christians
7 The Category of the ‘School of Valentinus’ in Early Christian Scholarship
8 Conclusions: the Dual Structure of the Community Behind TriTrac