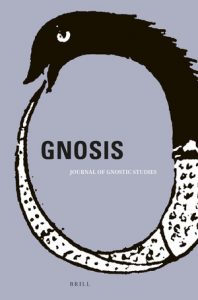 Gnosis: Journal of Gnostic Studies is a peer-reviewed publication devoted to the study of Gnostic religious currents from the ancient world to the modern, where ‘Gnostic’ is broadly conceived as a reference to special direct knowledge of the divine, which either transcends or transgresses conventional religious knowledge. It aims to publish academic papers on: the emergence of the Gnostic, in its many different historical and local cultural contexts; the Gnostic strands that persisted in the middle ages; and modern interpretations of Gnosticism – with the goal of establishing cross-cultural and trans-historical conversations, together with more localized historical analyses.

The corpus of Gnostic materials includes (but is not restricted to) testimonies from outsiders as well as insider literature such as the Nag Hammadi collection, the Hermetica, Neoplatonic texts, the Pistis Sophia, the books of Jeu, the Berlin and Tchacos codices, Manichaean documents, Mandaean scriptures, and contemporary Gnostic fiction/film and ‘revealed’ literature. The journal will publish the best of traditional historical and comparative scholarship while also featuring newer approaches that have received less attention in the established literature, such as cognitive science, cognitive linguistics, social memory, psychology, ethnography, sociology, and literary theory.

Visionary Experience and Ritual Realism in the Ascent of the Discourse on the Eighth and the Ninth (NHC VI, 6) – Christian H. Bull

Pseudonymity, Gnosis, and the Self in Gnostic Literature – David Brakke

The Apocalypse of Paul (NHC V, 2) as a Valentinian Baptismal Liturgy of Ascent – Michael S. Domeracki

Iamblichus and the Talisman of Gnosis – Gregory Shaw

The Composition of the Gospel of Thomas: Original Language and Influences , written by Simon Gathercole – Shawn J. Wilhite