A Guide to Classical Knowledge 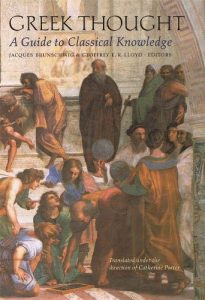 Ancient Greek thought is the essential wellspring from which the intellectual, ethical, and political civilization of the West draws and to which, even today, we repeatedly return. In more than sixty essays by an international team of scholars, this volume explores the full breadth and reach of Greek thought — investigating what the Greeks knew as well as what they thought about what they knew, and what they believed, invented, and understood about the conditions and possibilities of knowing. Calling attention to the characteristic reflexivity of Greek thought, the analysis in this book reminds us of what our own reflections owe to theirs. In sections devoted to philosophy, politics, the pursuit of knowledge, major thinkers, and schools of thought, this work shows us the Greeks looking at themselves, establishing the terms for understanding life, language, production, and action. The authors evoke not history, but the stories the Greeks told themselves about history; not their poetry, but their poetics; not their speeches, but their rhetoric. Essays that survey political, scientific, and philosophical ideas, such as those on Utopia and the Critique of Politics, Observation and Research, and Ethics; others on specific fields from Astronomy and History to Mathematics and Medicine; new perspectives on major figures, from Anaxagoras to Zeno of Elea; studies of core traditions from the Milesians to the various versions of Platonism: together these offer a sense of the unquenchable thirst for knowledge that marked Greek civilization—and that Aristotle considered a natural and universal trait of humankind. With thirty-two pages of color illustrations, this work conveys the splendor and vitality of the Greek intellectual adventure.

Introduction: On Home Ground in a Distant Land

Images of the World

The Question of Being

The Statesman As Political Actor

Utopia and the Critique of Politics

The Sage and Politics

The Pursuit of Knowledge

Schools and Sites of Learning

Demonstration and the Idea of Science