Histories of the Hidden God

Concealment and Revelation in Western Gnostic, Esoteric, and Mystical Traditions 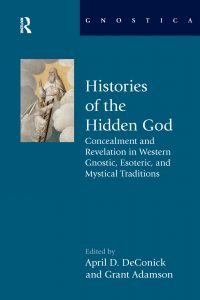 In Western religious traditions, God is conventionally conceived as a humanlike creator, lawgiver, and king, a being both accessible and actively present in history. Yet there is a concurrent and strong tradition of a God who actively hides. The two traditions have led to a tension between a God who is simultaneously accessible to humanity and yet inaccessible, a God who is both immanent and transcendent, present and absent. Western Gnostic, esoteric, and mystical thinking capitalizes on the hidden and hiding God. He becomes the hallmark of the mystics, Gnostics, sages, and artists who attempt to make accessible to humans the God who is secreted away. ‘Histories of the Hidden God’ explores this tradition from antiquity to today. The essays focus on three essential themes: the concealment of the hidden God; the human quest for the hidden God, and revelations of the hidden God.

Part I – Concealment of the Hidden God

1 – Who is hiding in the Gospel of John? Reconceptualizing Johannine theology and the roots of Gnosticism – April D. DeConick, Rice University

2 – Adoil outside the cosmos: God before and after Creation in the Enochic tradition – Andrei A. Orlov, Marquette University

4 – Hidden God and hidden self: The emergence of apophatic anthropology in Christian mysticism – Bernard McGinn, University of Chicago

Part II – The Human Quest for the Hidden God

6 – Obscured by the scriptures, revealed by the prophets: God in the Pseudo-Clementine Homilies – Kelley Coblentz Bautch, St Edward’s University

8 – From hidden to revealed in Sethian revelation, ritual, and protology – John D. Turner, University of Nebraska

13 – On the Mothman, God, and other monsters: The demonology of John A. Keel – Jeffrey J. Kripal, Rice University