Iamblichus and the Foundations of Late Platonism 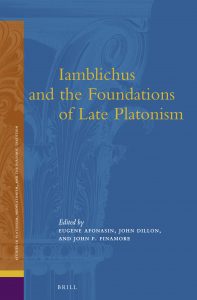 Iamblichus of Chalcis (c. 240-c. 325 C.E.), successor to Plotinus and Porphyry, gave new life to Neoplatonism with his many philosophical and religious refinements. Once regarded as a religio-magical quack, Iamblichus is now seen as a philosophical innovator who harmonized not only Platonic philosophy with religious ritual but also Platonism with the ancient philosophical and religious tradition. Building on recent scholarship on Iamblichean philosophy, the ten papers in this volume explore various aspects of Iamblichus’ oeuvre. These papers help show that Iamblichus re-invented Neoplatonism and made it the major school of philosophy for centuries after his death.

The Letters of Iamblichus: Popular Philosophy in a Neoplatonic Mode – John Dillon

Iamblichus: The Two-Fold Nature of the Soul and the Causes of Human Agency – Daniela P. Taormina

The Role of Aesthesis in Theurgy – Gregory Shaw

Iamblichus on the Grades of Virtue – John F. Finamore

The Role of Divine Providence, Will and Love in Iamblichus’ Theory of Theurgic Prayer and Religious Invocation – Crystal Addey