Other Ways to Truth 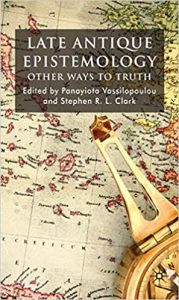 Late Antique Epistemology explores the techniques used by late antique philosophers to discuss truth. Non-rational ways to discover truth, or to reform the soul, have usually been thought inferior to the philosophically approved techniques of rational argument, suitable for the less philosophically inclined, for children, savages or the uneducated. Religious rituals, oracles, erotic passion, madness may all have served to waken courage or remind us of realities obscured by everyday concerns. What is unusual in the late antique classical philosophers is that these techniques were reckoned as reliable as reasoned argument, or better still. Late twentieth century commentators have offered psychological explanations of this turn, but only recently had it been accepted that there might also have been philosophical explanations, and that the later antique philosophers were not necessarily deluded.

1. Porphyry and the Debate Over Traditional Religious Practices – Busine, Aude

5. Ibn Ṭufayl and the Wisdom of the East: On Apprehending the Divine – Kukkonen, Taneli

7. Animation of Statues in Ancient Civilizations and Neoplatonism – Uzdavinys, Algis

8. Platonists and the Teaching of Rhetoric in Late Antiquity – Heath, Maclcom