From Celsus to Paul of Aegina 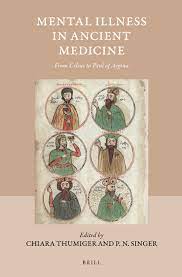 In Mental Illness in Ancient Medicine: From Celsus to Paul of Aegina a detailed account is given, by a range of experts in the field, of the development of different conceptualizations of the mind and its pathology by medical authors from the beginning of the imperial period to the seventh century CE. New analysis is offered, both of the dominant texts of Galen and of such important but neglected figures as Rufus, Archigenes, Athenaeus of Attalia, Aretaeus, Caelius Aurelianus and the Byzantine ‘compilers’. The work of these authors is considered both in its medical-historical context and in relation to philosophical and theological debates – on ethics and on the nature of the soul – with which they interacted.

Between Insanity and Wisdom: Perceptions of Melancholy in the Ps.-Hippocratic Letters 10–17 – George Kazantzidis

“Not a Daimōn, but a Severe Illness”: Oribasius, Posidonius and Later Ancient Perspectives on Superhuman Agents Causing Disease – Nadine Metzger

“A Most Acute, Disgusting and Indecent Disease”: Satyriasis and Sexual Disorders in Ancient Medicine – Chiara Thumiger

Mental Illnesses in the Medical Compilations of Late Antiquity: The Case of Aëtius of Amida – Ricarda Gäbel

Philosophical Psychological Therapy: Did It Have Any Impact on Medical Practice? – Christopher Gill