Studies in Platonism, Neoplatonism, and the Platonic Tradition #3 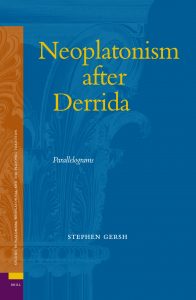 This volume deals with the relation between Jacques Derrida’s writing and Neoplatonism (ancient, patristic, medieval). Starting from the undeniable fact of Derrida’s continuous engagement with this tradition, the present study deals not only with the actual reading of the Neoplatonists by Derrida (« Derrida after Neoplatonism ») but also with a hypothetical reading of Derrida by Neoplatonism (« Neoplatonism after Derrida »). Thus, the intended audience is both philologists and philosophers interested in the encounter of ancient and contemporary thought. Separate chapters are devoted to a general study of Neoplatonism and Deconstruction, commentaries on three Derridean texts in which their ‘Neoplatonic’ implications are developed, and a treatment of the problem of non-discursive thought in which all Neoplatonic and Derridean perspectives are transcended.

Chapter Four Remains to be Thought

4.2 From Ontology to Erasure