Pagan and Christian in an Age of Anxiety

Some Aspects of Religious Experience from Marcus Aurelius to Constantine 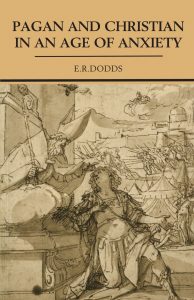 Interest in the world of Late Antiquity is currently undergoing a significant revival, and in this provocative book, now reissued in paperback, E. R. Dodds anticipated some of the themes now engaging scholars. There is abundant material for the study of religious experience in late antiquity, and through it Professor Dodds examines, from a sociological and psychological standpoint, the personal religious attitudes and experiences common to pagans and Christians in the period between Marcus Aurelius and Constantine. He looks first at general attitudes to the world and the human condition before turning to specific types of human experience. World-hatred and asceticism, dreams and states of possession, and pagan and Christian mysticism are all discussed. Finally Dodds considers both pagan views of Christianity and Christian views of paganism as they emerge in the literature of the time. Although primarily written for social and religious historians, this study will also appeal to all those interested in the ancient world and its thought.

I – MAN AND THE MATERIAL WORLD

II – MAN AND THE DAEMONIC WORLD

III – MAN AND THE DIVINE WORLD

IV – THE DIALOGUE OF PAGANISM WITH CHRISTIANITY