Pagans and Christians in the Late Roman Empire 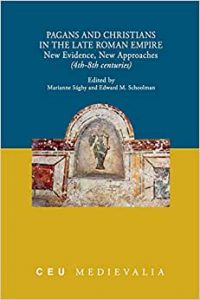 Do the terms ‘pagan’ and ‘Christian,’ ‘transition from paganism to Christianity’ still hold as explanatory devices to apply to the political, religious and cultural transformation experienced Empire-wise? Revisiting ‘pagans’ and ‘Christians’ in Late Antiquity has been a fertile site of scholarship in recent years: the paradigm shift in the interpretation of the relations between ‘pagans’ and ‘Christians’ replaced the old ‘conflict model’ with a subtler, complex approach and triggered the upsurge of new explanatory models such as multiculturalism, cohabitation, cooperation, identity, or group cohesion. This collection of essays, inscribes itself into the revisionist discussion of pagan-Christian relations over a broad territory and time-span, the Roman Empire from the fourth to the eighth century. A set of papers argues that if ‘paganism’ had never been fully extirpated or denied by the multiethnic educated elite that managed the Roman Empire, ‘Christianity’ came to be presented by the same elite as providing a way for a wider group of people to combine true philosophy and right religion. The speed with which this happened is just as remarkable as the long persistence of paganism after the sea-change of the fourth century that made Christianity the official religion of the State. For a long time afterwards, ‘pagans’ and ‘Christians’ lived ‘in between’ polytheistic and monotheist traditions and disputed Classical and non-Classical legacies.