Heidelberg University and The Internet Archive 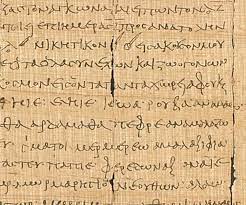 The Greek Magical Papyri (Latin Papyri Graecae Magicae, abbreviated PGM) is the name given by scholars to a body of papyri from Graeco-Roman Egypt, which each contain a number of magical spells, formulae, hymns and ritual. The materials in the papyri date from the 2nd century BC to the 5th century AD. The manuscripts came to light through the antiquities trade, from the 18th century onwards. One of the best known of these texts is the Mithras Liturgy.

The texts were published in a series, and individual texts are referenced using the abbreviation PGM plus the volume and item number. Each volume contains a number of spells and rituals. Further discoveries of similar texts from elsewhere have been allocated PGM numbers for convenience.

PGM XII and XIII were the first to be published, appearing in 1843 in Greek and in a Latin translation in 1885.

A digital version of the PGM (specifically, Preisendanz vol. II) at the University of Heidelberg: