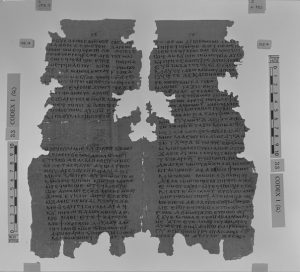 Prototype: Under leadership of Roger Bagnall and with funding from the Andrew W. Mellon Foundation and the National Endowment for the Humanities, in 2006/07, Columbia University Libraries developed specifications for a ‘Papyrological Navigator,’ (PN) in order to demonstrate that multiple digital papyrological resources could be co-displayed in a scholarly web resource. In the following year a prototype PN was released. In 2007/08, with further support from the Mellon Foundation, a Duke-led team launched ‘Integrating Digital Papyrology’, whose three phases ran through 2012. The goals were to migrate the DDbDP from SGML to TEI EpiDoc XML, and from betacode to Unicode; to map DDbDP texts and HGV metadata to corresponding APIS images and catalog records, and to convert both HGV and APIS data to EpiDoc; to enhance the Papyrological Navigator; to create a version controlled, transparent and auditable, multi-author, web-based, real-time, tag-lite, editing environment, which–in tandem with a new editorial infrastructure–would allow the entire community of papyrologists to take editorial control of core disciplinary data. In 2009 the new PN and Papyrological Editor (PE) were moved to NYU’s Institute for the Study of the Ancient World, which was the seat of production until July 2013.

Release: In 2010 the new papyri.info was released to production (see J. Sosin’s presentation to the 26th Intl Papyrological Congress), featuring the new PE and a completely redesigned PN.

Stewardship: In July 2013 the Duke University Libraries, again with the generous support of the Mellon Foundation, launched the Duke Collaboratory for Classics Computing (DC3), a digital classics unit embedded in the Libraries. A core part of their mission is the maintenance and enhancement of the papyri.info toolset and community.

Moving Parts: See the top level data flow. The PN supports browse and faceted search of the constellation of papyri.info resources. It relies on an RDF triple store (Apache Jena) to manage the relationships between documents from different sources and Apache Solr for its search and faceting capabilities. The PE (1) allows users to add new or change existing ‘publications’ in the PN, edit the EpiDoc, either via database-style form (for APIS, HGV, BP) or proxy EpiDoc syntax called Leiden+ (for DDbDP), (2) enables submission of all such edits to peer review, which may result in commission of such to the canonical repository, and (3) provides transparent version-control (via git) of all such edits, system-wide. This bundle of services is referred to as Son of Suda on Line (SoSOL), in homage to the Suda On Line project and our colleague Ross Scaife.