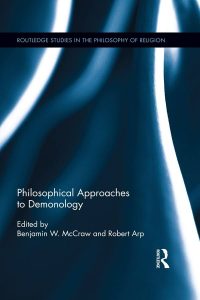 In contradistinction to the many monographs and edited volumes devoted to historical, cultural, or theological treatments of demonology, this collection features newly written papers by philosophers and other scholars engaged specifically in philosophical argument, debate, and dialogue involving ideas and topics in demonology. The contributors to the volume approach the subject from the perspective of the broadest areas of Western philosophy, namely metaphysics, epistemology, logic, and moral philosophy. The collection also features a plurality of religious, cultural, and theological views on the nature of demons from both Eastern and Western thought, in addition to views that may diverge from these traditional roots. Philosophical Approaches to Demonology will be of interest to philosophers of religion, theologians, and scholars working in philosophical theology and demonology, as well as historians, cultural anthropologists, and sociologists interested more broadly in the concept of demons.

Part I. Demons in Christianity

1 Augustine and Aquinas on the Demonic – Benjamin W. McCraw

2 The Demonic Body: Demonic Ontology and the Domicile of the Demons in Apuleius and Augustine – Seamus O’Neill

4 Women as « The Devil’s Gateway »: A Feminist Critique of Christian Demonology – Jeff Ewing

8 The Jinn and the Shayatīn – Edward Moad

13 Whedon’s Demons: The Immorality of Moral Clarity and the Ethics of Moral Complexity – Talia Morag

14 Modern Representations of Evil: Kant, Arendt, and the Devil in Goethe’s Faust and Bulgakov’s The Master and Margarita – Elvira Basevich

15 The Politics of Possession: Reading King James’s Daemonologie Through the Lens of Mimetic Realism – Duncan Reyburn