Philosophy and Salvation in Greek Religion 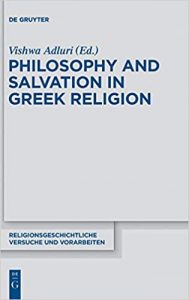 Ever since Vlastos’ “Theology and Philosophy in Early Greek Thought,” scholars have known that a consideration of ancient philosophy without attention to its theological, cosmological and soteriological dimensions remains onesided. Yet, philosophers continue to discuss thinkers such as Parmenides and Plato without knowledge of their debt to the archaic religious traditions. Perhaps our own religious prejudices allow us to see only a “polis religion” in Greek religion, while our modern philosophical openness and emphasis on reason induce us to rehabilitate ancient philosophy by what we consider the highest standard of knowledge: proper argumentation. Yet, it is possible to see ancient philosophy as operating according to a different system of meaning, a different “logic.” Such a different sense of logic operates in myth and other narratives, where the argument is neither completely illogical nor rational in the positivist sense. The articles in this volume undertake a critical engagement with this unspoken legacy of Greek religion. The aim of the volume as a whole is to show how, beyond the formalities and fallacies of arguments, something more profound is at stake in ancient philosophy: the salvation of the philosopher-initiate.

Arbogast Schmitt – Self-Determination and Freedom: The Relationship of God and Man in Homer. Translated by Joydeep Bagchee

Luc Brisson – Memory and the Soul’s Destiny in Plotinus. Translated by Michael Chase