Philosophy and Theurgy in Late Antiquity 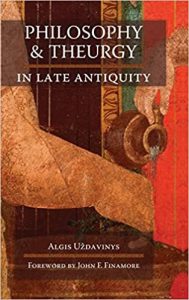 The Ancient Philosophy, in its original Orphico-Pythagorean and Platonic form, is not simply a way of life in accordance with the divine or human intellect (nous), but also the way of alchemical transformation and mystical illumination achieved through initiatic “death” and subsequent restoration at the level of divine light. As a means of spiritual reintegration and unification, ancient philosophy is inseparable from the hieratic rites. The theurgic “animation” of statues appears to be among the main keys for understanding how various royal and priestly practices, related to the daily ritual service and encounter with the divine presence in the temples, developed into the Neoplatonic mysticism of late antiquity.

Eidothea and Proteus: the veiled images of philosophy

Standing face to face with immortality

Philosophy and the hieratic rites of ascent

The task of ‘Egyptian philosophy’: to connect the end to the beginning

The Kronian life of spectator: ‘to follow one’s heart in the tomb’

The invincible warriors as models of philosophical lifestyle

The inward journey to the place of truth

The death which detaches form the inferior

Entering the solar barque of Atum-Ra

Philosophical initiations in the Netherworld

Self-knowledge and return to one’s innermost self

Recovered unity of Dionysus in ourselves

Philosophical mummification inside the cosmic tomb

Platonic dialectic: the science of purificarion and restoration of unity

The ancient logos and its sacramental function

Riddles of the cosmic Myth

Definitions of theurgy in antiquity

Figures, names, and tokens of the divine speech

The prophet Bitys and the overwhelming Name of God

The descending and ascending paths of Heka

The Silence beforer the gods and its creative magic

The Sounding breaths of the All-Working Fire

The Elevating rays of the resounding light

The rites of hieratic invocation and ascent

The Tantric alchemy and the Osirian mummification

Golden seeds of the noetic Fire

Theurgic speech of the birds and solar knowledge

Tongues of the gods and their songs

Back to the life-giving wombs and the ineffable Silence

Chanting out the universe by the Name of everything

When Orontes flowed into Tiber: the revived tradition

Myth and symbol: what makes the impossible happen?

Metaphysics of creation and its images in pharaonic Egypt

Theology of images and its esoteric dimension

Privileged habitations for the immortal gods

Sense perception and intellection in Neoplatonism

Divine light and luminous vehicle of the soul

Living images of the Egyptian gods

To be made into a spirit of light

The opening of the statue’s mouth

Mystical union with the noetic Sun

Revelation of the divine face

Divine statues and their sacred gifts

Salvation as return to the divine

Symbols as ontological traces of the divine

The anagogic power of secret names and tokens

The ineffable statues of trancendent light

The aim of philosophy

To be reborn into the solar world

The cosmic theatre of sacrificial fires

Appendix: The limits of Speculation in Neoplatonism

The Hermeneutical program of reading Neoplatonism

Masks and tongues of the ineffable

Modes of intellection and union

To live means to read