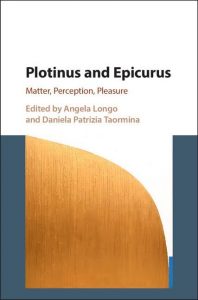 This volume investigates the reasons why Plotinus, a philosopher inspired by Plato, made critical use of Epicurean philosophy. Eminent scholars show that some fundamental Epicurean conceptions pertaining to ethics, physics, epistemology and theology are drawn upon in the Enneads to discuss crucial notions such as pleasure and happiness, providence and fate, matter and the role of sense perception, intuition and intellectual evidence in relation to the process of knowledge acquisition. By focusing on the meaning of these terms in Epicureanism, Plotinus deploys sophisticated methods of comparative analysis and argumentative procedures that ultimately lead him to approach certain aspects of Epicurus’ philosophy as a benchmark for his own theories and to accept, reject or discredit the positions of authors of his own day. At the same time, these discussions reveal what aspects of Epicurean philosophy were still perceived to be of vital relevance in the third century AD.

Chapter 2 – The mention of Epicurus in Plotinus’ tr. 33 (Enn. II 9) in the context of the polemics between pagans and Christians in the second to third centuries AD – Angela Longo

Chapter 10 – Plotinus and Epicurus on pleasure and happiness – Alessandro Linguiti