Ennead II.9: Against the Gnostics 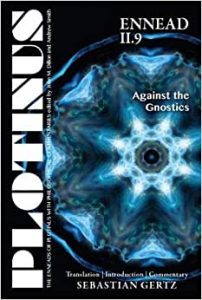 How was the universe created, and what is our place within it? These are the questions at the heart of Plotinus’ Against the Gnostics. For the Gnostics, the universe came into being as a result of the soul’s fall from intelligible reality—it is the evil outcome of a botched creation. Plotinus challenges this, and insists that the soul’s creation of the world is the necessary consequence of its contemplation of the ideal forms. While the Gnostics claim to despise the visible universe, Plotinus argues that such contempt displays their ignorance of the higher realities of which the cosmos is a beautiful image. Against the Gnostics is a polemical text. It aims to show the superiority of Plotinus’ philosophy over that of his Gnostic rivals, and poses unique challenges: Plotinus nowhere identifies his opponents by name, he does not set out their doctrines in any great detail, and his arguments are frequently elliptical. The detailed commentary provides a guide through these difficulties, making Plotinus’ meandering train of thought in this important treatise accessible to the reader.