Plotinus in Dialogue with the Gnostics 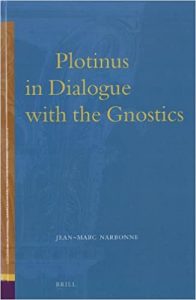 The point of view put forth in the following pages differs greatly from the common perspective according to which the treatises 30 to 33 constitute a single work, a Grossschrift, and this single work, Plotinus essential response to the Gnostics. Our perspective is that of an ongoing discussions with his Gnostic yet Platonizing friends, which started early in his writings (at least treatise 6), developed into what we could call a Grosszyklus (treatises 27 to 39), and went on in later treatises as well (e. g. 47-48, 51). The prospect of an ongoing discussion with the Gnostics bears an additional virtue, that of allowing for a truly dynamic understanding of the Plotinian corpus.

Study One.The Controversy over the Generation of Matter in Plotinus:The Riddle Resolved?

Study Two.The Riddle of the Partly Undescendend Soul in Plotinus: The Gnostic/Hermetic Path of the ὁμοούσιος

Study Three. A Doctrinal Evolution in Plotinus? The Weakness of the Soul in Its Relation to Evil

Study Six. New Reflections on God as CAUSA SUI in Plotinus and Its Possible Gnostic Sources