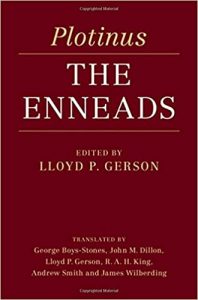 The Enneads by Plotinus is a work which is central to the history of philosophy in late antiquity. This volume is the first complete edition of the Enneads in English for over seventy-five years, and also includes Porphyry’s Life of Plotinus. Led by Lloyd P. Gerson, a team of experts present up-to-date translations which are based on the best available text, the editio minor of Henry and Schwyzer and its corrections. The translations are consistent in their vocabulary, making the volume ideal for the study of Plotinus’ philosophical arguments. They also offer extensive annotation to assist the reader, together with cross-references and citations which will enable users more easily to navigate the texts. This monumental edition will be invaluable for scholars of Plotinus with or without ancient Greek, as well as for students of the Platonic tradition.
(Text by the editors)

On the Life of Plotinus and the Order of His Books by Porphyry of Tyre
Ennead One
Ennead Two
Ennead Three
Ennead Four
Ennead Five
Ennead Six.