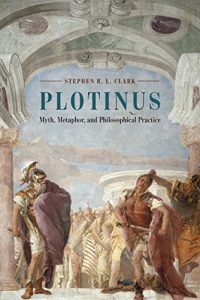 Plotinus, the Roman philosopher (c. 204-270 CE) who is widely regarded as the founder of Neoplatonism, was also the creator of numerous myths, images, and metaphors. They have influenced both secular philosophers and Christian and Muslim theologians, but have frequently been dismissed by modern scholars as merely ornamental. In this book, distinguished philosopher Stephen R. L. Clark shows that they form a vital set of spiritual exercises by which individuals can achieve one of Plotinus’s most important goals: self-transformation through contemplation. Clark examines a variety of Plotinus’s myths and metaphors within the cultural and philosophical context of his time, asking probing questions about their contemplative effects. What is it, for example, to “think away the spatiality” of material things? What state of mind is Plotinus recommending when he speaks of love, or drunkenness, or nakedness? What star-like consciousness intended when he declares that we were once stars or are stars eternally? What does it mean to say that the soul goes around God? And how are we supposed to “bring the god in us back to the god in all”? Through these rich images and structures, Clark casts Plotinus as a philosopher deeply concerned with philosophy as a way of life.