Priests and Prophets among Pagans, Jews and Christians 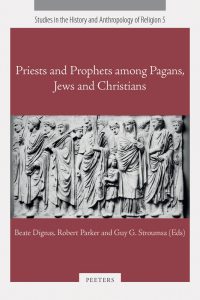 The emperor Julian pointed out that the duties of priesthood were better understood among ‘the impious Galileans’ (i.e. Christians) than among his pagan contemporaries. Like the emperor, the essays in this volume look in both directions. Its pages are populated by very diverse figures: Plutarch, Aelius Aristides, Alexander of Abonouteichos, Daniel the Stylite, Gregory of Nazianzus, Shenoute of Atripe, Mani, Muhammad, and a host of anonymous Greek and Roman priests, prophets, and diviners. The priests of second temple Judaism are considered too. Both in the Greco-Roman and the early Christian worlds the neat division between priests and prophets proves hard to sustain. But in terms of fame and influence a strong contrast emerges between Greco-Roman and Judeo-Christian prophets; this is why it is only among Jews and Christians that ‘false prophets’ are feared. Two recurrent preoccupations are the relation of priests and prophets to secular power, and the priest/prophet not as reality but as idea, an imagined figure. Leading scholars of the religions of antiquity come together in this wide-ranging and innovative volume.

T. RAJAK, Investment in/of the Jerusalem Priesthood in the Second Temple and Beyond

N. BELAYCHE, Priests as Diviners: An Impact on Religious Changes in Imperial Anatolia?

J.N. BREMMER, The Representation of Priests and Priestesses in the Pagan and Christian Greek Novel

K. TRAMPEDACH, Daniel Stylites and Leo I: an Uneasy Relationship between Saint and Emperor

Index of names, subjects and passages.