Religion and Competition in Antiquity 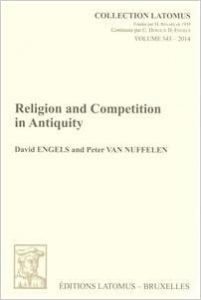 The notion of competition has become crucial to our understanding of Greek and Roman religion and is often invoked to explain religious changes and to describe the relationship between various cults. This volume seeks to raise our awareness of what the notion implies and to test its use for the analysis of ancient religions. The papers range from Classical Greece, Hellenistic Babylon, Rome and the Etruscans, to Late Antiquity and the rise of Islam. They seek to determine how much can be gained in each individual case by understanding religious interaction in terms of rivalry and competition. In doing so, the volume hopes to open a more explicit debate on the analytical tools with which ancient religion is currently being studied.

Cohabitation or competition in Ostia under the Empire? – Françoise van Haeperen

Competing coenobites: food and drink in the Lives of Theodoretus of Cyrrhus – Veit Rosenberger

A time for prayer and a time for pleasure: Christianity’s struggle with the secular world – Ine Jacobs

The conquest of the past: Christian attitudes towards civic history – Aude Busine

Oriental religions and the conversion of the Roman Empire: the views of Ernest Renan and of Franz Cumont on the transition from traditional paganism to Christianity – Danny Praet