Religion in the Ancient Greek City 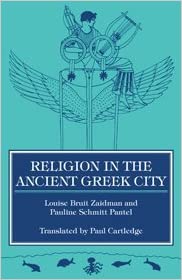 This book is an English translation of the French work La Religion Grecque. Its purpose is to consider how religious beliefs and cultic rituals were given expression in ancient Greece. The chapters cover first ritual and then myth, rooting the account in the practices of the classical city while also taking seriously the world of the imagination. For this edition the bibliography has been substantially revised to meet the needs of a mainly student, English-speaking readership. The book is enriched throughout by illustrations, and by quotations from original sources.

Author’s preface to the English translation

PART I – Introduction: How should we study Greek civic religion?

1 – The necessity of cultural estrangement

10 – The festival system: the Athenian case

I – The classical Greek temple

II – The monuments of the Athenian Akropolis