Philosophical Readings of Religion in the Post-Hellenistic Period 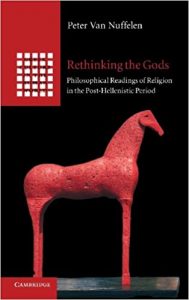 Ancient philosophers had always been fascinated by religion. From the first century BC onwards, the traditionally more hostile attitude of Greek and Roman philosophy was abandoned in favour of the view that religion was a source of philosophical knowledge. This book studies that change, not from the perspective of the history of religion, as is usual, but understands it as part of the wider tendency of Post-Hellenistic philosophy to open up to external, non-philosophical sources of knowledge and authority. It situates two key themes, ancient wisdom and cosmic hierarchy, in the context of Post-Hellenistic philosophy and traces their reconfigurations in contemporary literature and in the polemic between Jews, Christians and pagans. Overall, Post-Hellenistic philosophy can be seen to have a relatively high degree of unity in its ideas on religion, which should not be reduced to a preparation for Neo-Platonism.