Round Trip to Hades in the Eastern Mediterranean Tradition

Visits to the Underworld from Antiquity to Byzantium 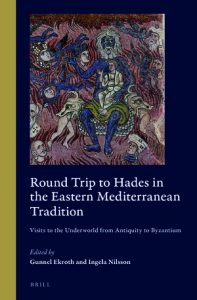 Round Trip to Hades in the Eastern Mediterranean Tradition explores how the theme of visiting the Underworld and returning alive has been treated, transmitted and transformed in the ancient Greek and Byzantine traditions. The journey was usually a descent (katabasis) into a dark and dull place, where forgetfulness and punishment reigned, but since ‘everyone’ was there, it was also a place that offered opportunities to meet people and socialize. Famous Classical round trips to Hades include those undertaken by Odysseus and Aeneas, but this pagan topic also caught the interest of Christian writers. The contributions of the present volume allow the reader to follow the passage from pagan to Christian representations of Hades – a passage that may seem surprisingly effortless.

Round Trip to Hades

An Introductory Tour – By: Gunnel Ekroth and Ingela Nilsson

Travels to the Beyond

A Guide – By: Fritz Graf

Hades, Homer and the Hittites

The Cultic-Cultural Context of Odysseus’ ‘Round Trip’ to the Underworld – By: Gunnel Ekroth

By: Ivana Petrovic and Andrej Petrovic

Introducing Oneself in Hades

Pathein and Mathein in the Descents to Hades

Thessalian Attitudes to Death and the Afterlife – By: Sofia Kravaritou and Maria Stamatopoulou

Round Trip to Hades

Hades in Hellenistic Philosophy (The Early Academy and Stoicism)

Following the Dead to the Underworld

An Archaeological Approach to Graeco-Roman Death Oracles – By: Wiebke Friese

The Sounds of Katabasis

Bellowing, Roaring, and Hissing at the Crossing of Impervious Boundaries – By: Pierre Bonnechere

Down There and Back Again

Variations on the Katabasis Theme in Lucian – By: Heinz-Günther Nesselrath

From Hades to Hell

The Virgin in Hades

Why did Hades Become Beautiful in Byzantine Art?

The Literary Katabasis in Twelfth-Century Byzantium – By: Ingela Nilsson

“Heaven for Climate, Hell for Company”

Ancient Greek Concepts of a Return from Death and Their Later Counterparts – By: Sarah Iles Johnston