Platonists, Priests, and Gnostics in the Third Century C.E. 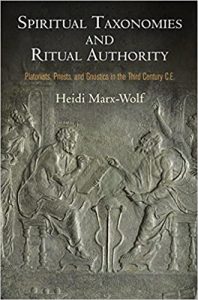 The people of the late ancient Mediterranean world thought about and encountered gods, angels, demons, heroes, and other spirits on a regular basis. These figures were diverse, ambiguous, and unclassified and were not ascribed any clear or stable moral valence. Whether or not they were helpful or harmful under specific circumstances determined if and what virtues were attributed to them. That all changed in the third century C.E., when a handful of Platonist philosophers—Plotinus, Origen, Porphyry, and Iamblichus—began to produce competing systematic discourses that ordered the realm of spirits in moral and ontological terms. In Spiritual Taxonomies and Ritual Authority, Heidi Marx-Wolf recounts how these Platonist philosophers organized the spirit world into hierarchies, or « spiritual taxonomies, » positioning themselves as the high priests of the highest gods in the process. By establishing themselves as experts on sacred, ritual, and doctrinal matters, they were able to fortify their authority, prestige, and reputation. The Platonists were not alone in this enterprise, and it brought them into competition with rivals to their new authority: priests of traditional polytheistic religions and gnostics. Members of these rival groups were also involved in identifying and ordering the realm of spirits and in providing the ritual means for dealing with that realm. Using her lens of spiritual taxonomy to look at these various groups in tandem, Marx-Wolf demonstrates that Platonist philosophers, Christian and non-Christian priests, and gnostics were more interconnected socially, educationally, and intellectually than previously recognized.