Strategies of Polemics in Greek and Roman Philosophy 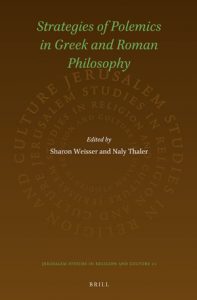 Strategies of Polemics in Greek and Roman Philosophy brings together papers written by specialists in the field of ancient philosophy on the topic of polemics. Despite the central role played by polemics in ancient philosophy, the forms and mechanisms of philosophical polemics are not usually the subject of systematic scholarly attention. The present volume seeks to shed new light on familiar texts by approaching them from this neglected angle. The contributions address questions such as: What is the role of polemic in a philosophical discourse? What were the polemical strategies developed by ancient philosophers? To what extent did polemics contribute to the shaping of important philosophical doctrines or standpoint?

The Continuation of Philosophy by Other Means?, André Laks

The Young Dogs of Eristic: Dialectic and Eristic in the Early Academy, Christopher Shields

Polemical Arguments about Pleasure: The Controversy within and around the Academy, Charlotte Murgier

The Politics of Aristotle’s Criticism of Plato’s Republic, Jozef Müller

Cyrenaics and Epicureans on Pleasure and the Good Life: The Original Debate and Its Later Revivals, Voula Tsouna

The Perfidious Strategy; or, the Platonists against Stoicism, Mauro Bonazzi

The Art of Quotation: Plutarch and Galen against Chrysippus, Sharon Weisser

The Invisible Adversary: Anti-Christian Polemic in Proclus’s Commentary on the Republic of Plato, Robert Lamberton