The aporetic tradition in ancient philosophy 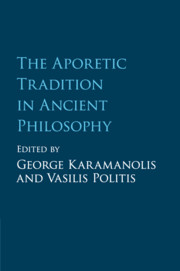 Ancient philosophers from an otherwise diverse range of traditions were connected by their shared use of aporia – translated as puzzlement rooted in conflicts of reasons – as a core tool in philosophical enquiry. The essays in this volume provide the first comprehensive study of aporetic methodology among numerous major figures and influential schools, including the Presocratics, Plato, Aristotle, Plutarch, Alexander of Aphrodisias, Academic sceptics, Pyrrhonian sceptics, Plotinus and Damascius. They explore the differences and similarities in these philosophers’ approaches to the source, structure, and aim of aporia, their views on its function and value, and ideas about the proper means of generating such a state among thinkers who were often otherwise opposed in their overall philosophical orientation. Discussing issues of method, dialectic, and knowledge, the volume will appeal to those interested in ancient philosophy and in philosophical enquiry more generally.

Chapter 2 – Socrates and the Benefit of Puzzlement

Chapter 8 – Uses of Aporiai in Aristotle’s Generation of Animals

Chapter 9 – Aporia and the New Academy