The Cult of Mithras in Late Antiquity 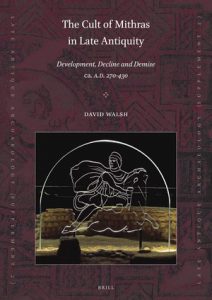 In The Cult of Mithras in Late Antiquity David Walsh explores how the cult of Mithras developed across the 3rd and 4th centuries A.D. and why by the early 5th century the cult had completely disappeared. Contrary to the traditional narrative that the cult was violently persecuted out of existence by Christians, Walsh demonstrates that the cult’s decline was a far more gradual process that resulted from a variety of factors. He also challenges the popular image of the cult as a monolithic entity, highlighting how by the 4th century Mithras had come to mean different things to different people in different places.

The Development of the Cult of Mithras in Late Antiquity

The Decline of the Cult I: The Evidence

The Decline of the Cult II: Explaining the Decline

The Fate of Mithraea

Gazetteer of Mithraea Active in the 4th c. and Those That Exhibit Evidence of Christian Iconoclasm